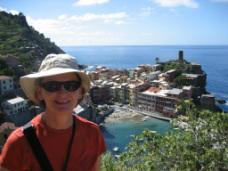 Roberta in Vernazza, Italy
THE VERNAZZA EFFECT - A woman's unforgettable journey to find her destiny.
Twenty-nine-year-old Ella Walker strives to live her best life. When tragedy strikes at both work and home, her world spirals out of control. She confides in her best friend, Tara Collins, who helps her confront her fears. With Tara by her side, Ella embarks on a cathartic journey across Italy to heal her body and soul. The odyssey leads to Vernazza, one of five seaside villages in the Cinque Terre. The enchanting hamlet provides the refuge and tranquility Ella needs to gain clarity about her future. As she awakens to her heart’s desire, fate intervenes with several cruel twists, threatening to upend her happiness. Will Ella cling to her old ways, or will she fight for her dreams that were born in Vernazza? 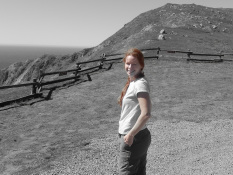 This is how Tara Collins looks
THE FOUNDATION - A young lawyer helps a sex-trafficking victim.
Tara is an idealistic lawyer who wants to change the world. She has devoted her life to helping people during troubled times. She’s a pillar of the community and admired by all. Alexander is a self-made entrepreneur who survived a horrific childhood. He amassed a fortune by bending the rules to win in business. He’s a loner who trusts no one. The two of them have nothing in common until a teenage runaway is found beaten and left for dead in an alley. The girl is rushed to a hospital where she recovers with one exception: she refuses to talk to anyone. Tara’s nonprofit foundation is asked to intervene. As she pieces together what happened, a terrifying trail of abuse leads straight to Alexander, a man who will do anything to protect his empire. The Foundation is a haunting tale about sex trafficking that doesn’t hold back. The predators are out there, watching and waiting. * Warning: This book contains profanity, sex, and violence. 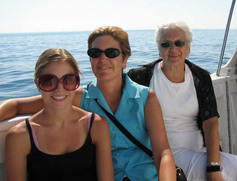 My three favorite strangers
THE BENNETT WOMEN - Three generations of women find their path in life.
Inspiration for this story came from a travel photo I took of a family who were enjoying a once-in-a-lifetime vacation in Italy. I don't know them but their image has always captured my imagination. This novel is an absorbing portrayal of three women who are at crossroads with one another and the world around them. As tension mounts, the Bennett women will confront buried truths about their lives, and they will begin to know themselves and each other in wonderous new ways. This tender yet unflinching story examines what moves them from daughter, mother, and grandmother to something much deeper.

Andy fishing in Belize
THE THINGS WE DON'T SAY - A contemporary romance.
I introduced Lilia Bennett-Parker and Matthew Campbell in The Bennett Women. Lilia Bennett-Parker has two loves: her cello and Matt Campbell. She’s not ready to settle down with her handsome, kind partner, though. When an incredible offer to join a symphony orchestra comes her way, she moves three thousand miles to pursue her dream. In California, Lilia quickly makes new friends, including Mei Li, a violinist preparing to raise a baby as a single mother. Meanwhile, back in Pennsylvania, Matt feels trapped by his responsibilities to his family and discontented with the increasingly commercial direction his software company is taking. After social media and Skype prove to be poor substitutes for face-to-face time, Matt and Lilia are tempted to end their relationship. When a friend asks Lilia for an enormous favor and Matt winds up in the midst of a hurricane, they must both decide what matters most to them. When they choose the lives they want, will they choose each other? 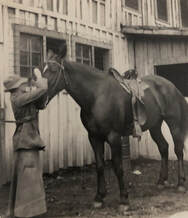 Inspiration for Clara
CLARA'S WAY - A nurse faces danger and love during the construction of the Panama Canal.
The year is 1904. Nurse Clara Tyler happily spends her days tending patients in rural Ohio. Her brother, who is working in Panama on the great canal, informs the family he must return home due to illness. Too sick to travel alone, he begs Clara to come and get him. Anxious to go but determined to save her brother, Clara makes her way to the Canal Zone. She is quickly drawn into a web of heartbreak, controversy, and friendship that keeps her there. When her father demands she return, Clara must decide where she belongs in this gripping tale about love and loss, courage, and the unexpected paths that shape our lives. 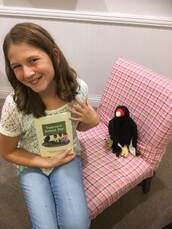 Ten-year-old Collette
VANESSA'S ROTTEN DAY - A whimsical tale based on a true animal rescue story.
One hot August morning, Vanessa, a young turkey vulture, is hunting for food when she spots a half-buried dog in a field. She swoops down and enjoys a savory meal. As she flies home, she begins to feel sick. Before long, she falls from the sky and crashes into a stranger's backyard. She's scared, unable to move, and desperately wants her mother. She trembles with fear as a human shadow closes in on her. What made her sick? Will the human harm her? Will she ever see her family again? 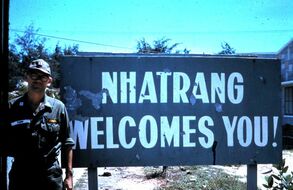 Andy in 1966
THE 8TH FIELD HOSPITAL - A memoir.
This book chronicles Andy's experiences as a physician during the Vietnam war. It is not a medical book; you will find few clinical details. Instead, Andy will transport you back to 1966 through his unique perspective about the human side of war, and describe his poignant return to Vietnam in 2004. 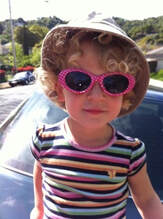 Two-year-old Sierra
CLOSE YET FAR - A middle-school novel.
Thirteen-year-old Coral Robertson is a popular eighth-grader at Bay Vista Middle School. Her classmate, Shay O'Brien, is a loner who lives in the shadows. The two girls have nothing in common until they become finalists in a speech contest. What begins as a friendly competition escalates into manipulation and bullying. As Coral struggles with pleasing people and Shay teeters on the edge, their lives begin to unravel. This story is about those moments in life that define who we are. Will Coral and Shay find the courage to face their fears? What's holding them back? Who wins the grand prize?