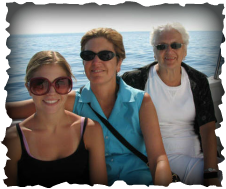 ​Inspiration for my third novel came from a travel photo I took of this family I met on a boat traveling to Portofino, Italy. I don't know these women but their image captured my imagination as I pondered their lives: How did they spend their days back home? Were they as happy as they appeared? What did they think about? What kept them awake at night? Did they get along?  As I answered these questions and others, this story emerged.

The Bennett Women is an absorbing portrayal of three women who are at a crossroad with one another and the world around them. Muriel Bennett is a feisty eighty-two-year-old artist who is struggling to maintain her independence. For the past forty-five years, she has happily resided at her Oregon lakefront home. She wants to live on her terms, but soon discovers how little control she has over her life.

Susanne Bennett, is a fifty-four-year-old CEO of a Fortune 500 technology company located in California. She leads more than three hundred thousand employees worldwide, but has little influence over the two people who matter most--her mother and daughter. Caught between two generations and a chaotic career, she must find a way to slow down before it’s too late.

Lilia Bennett-Parker, is a gifted twenty-two-year-old cellist who is in her last year of college at the prestigious New England Conservatory of Music in Boston. As she prepares for the most important year of her life, her world begins to unravel, making her question everything she has ever wanted.

As tension mounts, the Bennett women will confront buried truths about their lives, and they will begin to know themselves and each other in wondrous new ways. This tender yet unflinching story examines what moves them from daughter, mother, and grandmother to something much deeper.

Fun fact: This book is linked to my novel, The Foundation. Susanne Bennett's lawyer is Tara Collins. 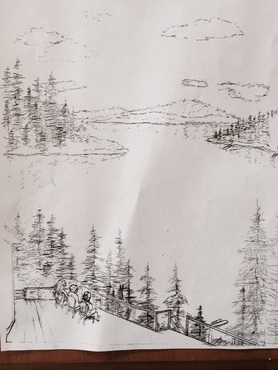 Are you curious about how a book gets its cover?

​In January 2015, I began working with a gifted artist, Debora, to create an image for my third novel, The Bennett Woman. It's an interesting process that began with Deb asking me lots of questions about my visual goal. I sent her several descriptive passages from my manuscript,  I shared several lake pictures from Tom and Nancy's Oregon home, and ones from Rob & Cyndi's trip to Maine. Deb and I looked at various lake images on the web so we could agree on color nuances.  Her first sketch didn't capture what I had in mind, so she returned to the drawing board. The sketch you see here was her third attempt at getting inside my head (not an easy task).  She turned this drawing into a watercolor, my friend Dave scanned it to Rita Wood (a talented graphic designer) who shaped it into a beautiful cover. Fun process, right?  Below is the finished painting and the final book cover. 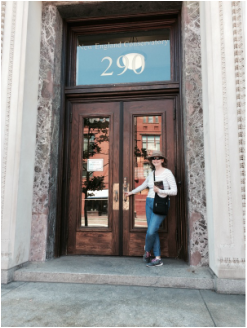 Full disclosure: I know very little about music. Before writing this novel, the only instrument in a string quartet I could name was the violin. So why did I place one of my characters at a prestigious music college? So I could learn about music! Yes, I'm one of those people who love exploring new things. To educate myself about the music world, I consulted with a woman who worked at the SF symphony for 25 years. I also flew to Boston to tour the New England Conservatory of Music. I soaked in performance halls, practice rooms, and student lounges. I read newsy bulletin boards, and took a ton of pictures.  Only after visiting the NEC did I finish writing Lilia's story. Oh, and by the way, a string quartet consists of two violins (first and second positions), a viola, and a cello. I fell in love with the deep sound of the cello in Beethoven's sonatas, which is why I made Lilia a cellist. 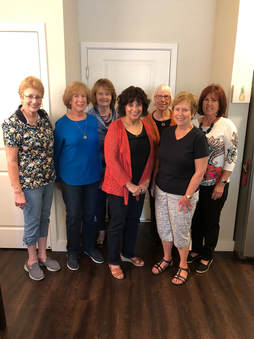 ​Meet the fabulous ladies from the San Jose Assistance League: Jean, Sandy, Barbara, Gloria, Karen, Martie, and Karen #2. A special shout-out to Jean for recommending The Bennett Women to her book club.

Thanks for including me in your lively discussion! The tasty lunch (especially Gloria's cake) was a bonus.